Home
Zen Garden
Real Zen Garden
This is where you can see various zen gardens!

A temple, Ryoanji (as shown on the top image) in Kyoto is the most famous and visited garden of zen style. The layout of the beauty played by the stones and the white sand makes you feel the silence and the tranquility, letting visitors shed tears of excitement.

However, the styles and the tastes of Zen Garden are not limited to a particular form. Here, we will introduce various zen gardens and tell you about the goodness and the beauty of each.

As we mentioned above, the most famous zen garden is the one in Ryoanji, among all gardens in this garden style, but in fact, Japan is home to various zen gardens with varisous landscapes centering around Kyoto.

However, there are so many that it is not easy to carefully select, appreciate and visit! You might also want to know the best season to visit them.

So, this time, I picked up the best 5 from the many zen gardens, so I’d be happy if you could use this as a reference (however, it is the best 5 from my selfish aesthetic point of view).

Remark: The information here was collected in February, 2021. We recommend that you contact the temple of your interest in advance to make sure that each garden is open to the public on the date of your actual visit. 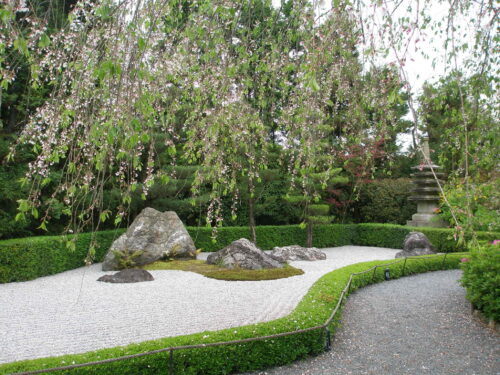 Also, in the garden of Yin, stones are exquisitely arranged in a space mainly made of black sand, and you can feel the majesty. Waves are also expressed by sand, and it is an excellent place to enjoy the “chicness” of Zen Gardens.

Kodaiji that is famous for one weeping cherry tree

The above picture was cited from Kodaiji Official Site.

This temple is famous for one weeping cherry tree that blooms beautifully in a zen garden. Hideyoshi Toyotomi (Daijo-daijin, top of a government office at this era) unified Japan in 1590, and his lawful wife, Kitanomandokoro (commonly known as Nene), founded this temple to mourn Hideyoshi after his passing.

The white sand and the dense sand dunes laid out in the garden (called Hashintei), and the branches of the weeping cherry tree that blooms in spring shine in the white sand are just exquisite. As the branches with light red flowers of the cherry tree sway in the wind, the sand patterns that express the flow of water create an extremely delicate and elegant space.

The above picture was cited from Kodaiji Official Site-Illumination.

Daitokuji Temple with beautiful contrast between moss and zen garden

Daitokuji is consisted of many towers (small temples) exist on its large site and has insatiable charming gardens. It is historically associated with Sen no Rikyu, a famous tea master from the Azuchi-Momoyama period. In 1589, Sen no Rikyu completed the construction of the gate of this temple, called Sanmon.

There are five Zen Gardens in Daitokuji, and splendid mosses are used everywhere. The garden that is the most famous for its moss is called Isshidan in front of the main hall (called hojyo) where a principal image is enshrined.
Kamejima ia a round area covered with mosses, and is located in the center of the garden. The Japanese stonework (トラベルjp) is placed in Kamejima, and is characterized by a crane and a turtle that are used as the symbols of longevity.

The white sand in this garden represents the ocean, and the stones placed on it represent the crane , the turtle and the island of immortality and longevity. It is interesting to know not only the well-balanced and beautifully arranged stonework, but also the meaning of it. The contrast between the white sand of Zen Garden and the lush moss garden is just beautiful.

The above picture was cited from 京都フリー写真素材.

Shokokuji was built around 1382 during the Muromachi period by Yoshimitsu Ashikaga, a general of Muromachi Shogunate. The temple was started by Muso Soseki (called Musokokushi as well) who is also said to be the first garden maker in Japan.

Kaisando garden, a zen garden at Shokokuji, is of a flat garden style similar to the one at Ryoanji. This is a place where you can enjoy a stream located between moss and artificial hills at the same time in a zen garden.

During the fall foliage season (early November to early December), the trees that grow on the moss turn red all at once, and the contrast of the colored leaves with the white sand is breathtaking. The autumn leaves that fall on the sand patterns drawn on the white sand also bring out a delicate beauty that you could have ever imagined.

Here, we would like to exceptionally introduce a zen garden from Kyushu, the sourthern part of Japan, not from Kyoto. Komyozenji is located on the right side of the information center of Dazaifu Tenmangu Shrine, which is famous for the god of learning, Sugawara no Michizane (the right minister under the emperor who was later transferred to Dazaifu and became an official). It is called “Moss Temple” in Dazaifu. It was erected in 1273 (Kamakura period).

A can’t-miss scenery here is the backyard that can be seen from the large room with tatami mats in the main hall (where the principal image is enshrined). The panoramic view of zen garden with beautiful white sand is said to be unspeakable. Moss represents land and islands, and white sand represents water and the ocean. It expresses how a drop of water spreads and flows into the ocean.

Also, during the fall foliage season (from mid-November), the depth created by the small forest, together with the leaves that fall in the pattern of white sand, show a deep and delicate beauty.

We hope you enjoyed various types of zen gardens that are mostly located in Tokyo.  Next, we are also introducing you to some zen garden miniatures & decor in the following link.  Bringing your own zen gardens into your home is relaxing and pleasurable!
miniature & decor

Zenrinji with a beautiful pattern of sand mosaic

Zenrin-ji Temple, also known as Eikando, was originally built by a disciple of Kukai during the Heian period (794-1185) ...

A park that was awarded three stars by Michelin?

Ritsurin Park in Takamatsu is worth the bother of a trip!? Ritsurin park was designated as a "Special Place of ...

Explore a beautiful zen garden in Entsuin in Miyagi!

Beautiful zen Garden-Entsuin Masamune Date (1567 to 1636) is a warlord of the Azuchi-Momoyama to early Edo peri...

Awarded three stars in the Michelin?

The scenery of Hokokuji is so attractive that it has been awarded three stars in the Michelin tourist edition, and you can enjoy the seasonal flowers.
Who is making patterns in Zen Gardens? Uncover the mystery!
Zen Garden Miniatures – How To Make Them!
Like many other sites, we use cookies on our website to give you the most relevant experience by remembering your preferences and repeat visits. By clicking “Accept”, you consent to the use of ALL the cookies.
Do not sell my personal information.
Cookie SettingsAccept
Manage consent

This website uses cookies to improve your experience while you navigate through the website. Out of these, the cookies that are categorized as necessary are stored on your browser as they are essential for the working of basic functionalities of the website. We also use third-party cookies that help us analyze and understand how you use this website. These cookies will be stored in your browser only with your consent. You also have the option to opt-out of these cookies. But opting out of some of these cookies may affect your browsing experience.
NecessaryAlways Enabled
Necessary cookies are absolutely essential for the website to function properly. These cookies ensure basic functionalities and security features of the website, anonymously.
Functional
Functional cookies help to perform certain functionalities like sharing the content of the website on social media platforms, collect feedbacks, and other third-party features.
Performance
Performance cookies are used to understand and analyze the key performance indexes of the website which helps in delivering a better user experience for the visitors.
Analytics
Analytical cookies are used to understand how visitors interact with the website. These cookies help provide information on metrics the number of visitors, bounce rate, traffic source, etc.
Advertisement
Advertisement cookies are used to provide visitors with relevant ads and marketing campaigns. These cookies track visitors across websites and collect information to provide customized ads.
Others
Other uncategorized cookies are those that are being analyzed and have not been classified into a category as yet.
SAVE & ACCEPT
Copied title and URL